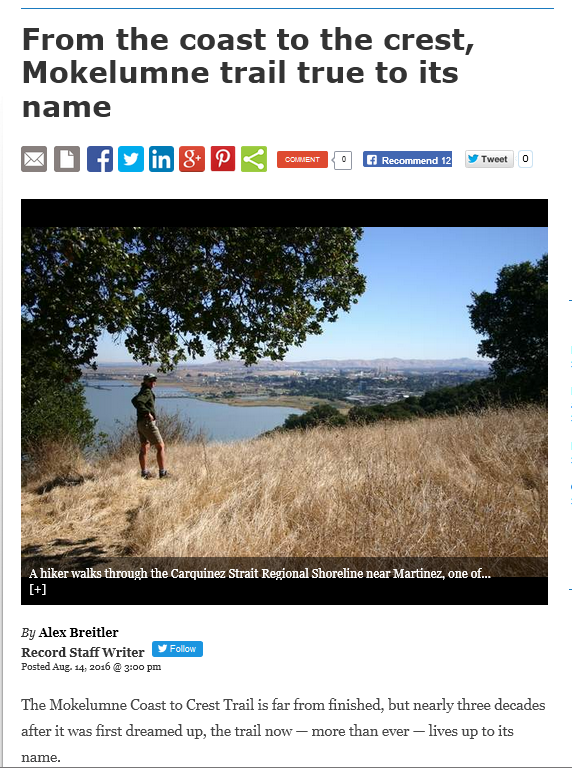 Stockton Record’s Alex Breitler serves up this humbling trail testimonial. It goes beyond saying that dozens and dozens of individuals and agencies contributed to laying down trail and helping visitors travel safely on it.

Delivering a 1988-2016 retrospective is the next task. We are sifting through literally hundreds of historical documents, maps and images going back to 1988. Stay tuned! 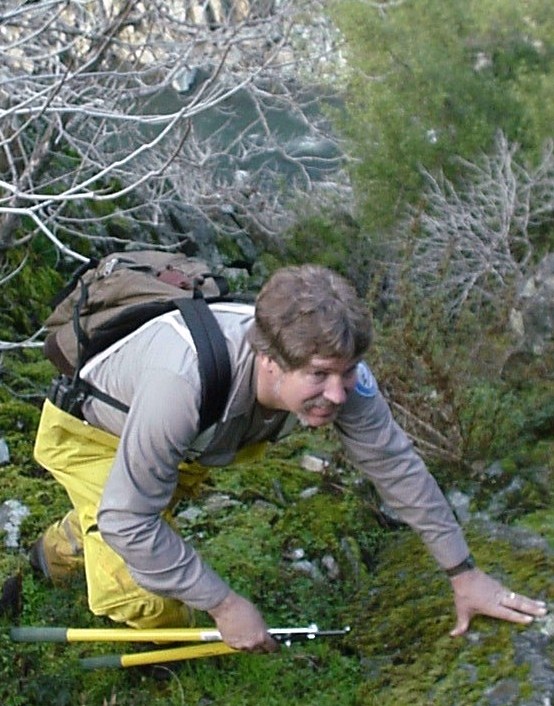 In 1990, Steve began his career at the District with the Camanche ranger unit. Previously he worked with the East Bay Regional Park District (EBRPD) for 14 years where he led equestrian tours and managed trail crews and volunteers.

Two years after starting at the District, Steve launched EBMUD’s award-winning Mokelumne Trailbuster volunteer program in the Pardee and Camanche watersheds. He has worked with volunteers every other Saturday to build a 32-mile segment of the Mokelumne Coast-to-Crest Trail along EBMUD property. He and the Trailbusters have completed 28 miles so far.

“My best memories on the job are working with the volunteers and operating the trail dozer to build the trails,” Steve says. “Putting my energy into this work then watching people use and enjoy the trail – knowing they are seeing wildlife and having a unique experience with the vistas, the Ranger wildflowers, the wildlife – that’s how I know I’ve done my job.”

More than 24 years in the making, the Coast-to-Crest Trail is envisioned as 300 miles of continuous trail that begins on the shores of San Francisco Bay and heads east to Ebbetts Pass in the Sierra. At various points it crosses EBMUD and EBPRD lands. Some sections of the trail are so rugged and remote, California Conservation Corps members had to camp nearby and hike in with Steve every day hauling tools and supplies.

“My goal is to finish the easternmost segment between Middle Bar and Highway 49 before retiring next year,” he says.

“Steve and I started on the same crew 21 years ago,” says Ranger Supervisor Chris Swann. “He has worked tirelessly to make the Mokelumne Coast-to-Crest Trail vision a reality. Through his efforts, progress continues and the public sees another shining example of the District’s commitment to community and the environment.”

Throughout his career Steve says he’s seen 13 mountain lions while on the job.

“This job is like working in a bakery or a candy store. Everywhere there are natural, cultural and historic features you just can’t get enough of! There’s the canal cave with the Native American pictographs; the Wildermuth home, a historic stone house built in 1861; and a portion of the trail between James Bar and Patty’s Point that is famous for the wildflowers,” he says.

Steve says to be a successful ranger you need to have stamina, be a jack-of-all-trades, be self-motivated and be able to work alone in remote locations.

“You have to be committed, interested in nature and want to share the information you have about the outdoors with the public,” he says.

“I do enjoy my job, but I also believe it’s important if you are spending 40 hours a week on a job, you feel you are making a difference.

Photo text: Steve says to be a successful ranger you need stamina and commitment. He is the tenth recipient of the California Trails and Greenways Conference’s Lifetime Achievement Award.

For me that has been working on the Coast-to-Crest Trail, conducting the tours, reaching out to the communities where we live and work, and recruiting volunteers” he says.

He adds, “I work with great people with myriad skills and abilities. There’s a great sense of collaboration and humor in this division.” He says that everyone in the division gets involved in the trails and volunteer program in some capacity.

“There are a lot of people I’d like to thank as I receive this award including my co-workers, the Mokelumne Coast-to-Crest Council and the Trailbuster volunteers. The volunteers, many of whom are retirees and from outside the area, have an impressive commitment and I am humbled by what they do.”

Steve and his wife Stephanie live in Glencoe, a town located 22 miles from Pardee Dam.

Just arrived home from a terrific mixer full of wonderful folks in Arnold, a small town near the trail in the Upper Mokelumne River Canyon segment. The topic was developing a ‘handshake’ with the local business community to help both sides thrive. Click on the picture to view the presentation. Thanks to everyone who welcomed the trail into the community!

The Trail Council is proud to introduce the first of many brochure maps defining the MCCT as it passes through East Bay Regional parkland in our East Bay-Contra Costa County segment. The map below is courtesy of the East Bay Regional Park District (EBRPD).

About ten years ago EBRPD completed the important first step of dedicating the Mokelumne Coast to Crest Trail by “piggybacking” it on existing EBRPD trails. Next up is completing maps and trail decals on existing EBRPD posts. We are indebted to Davio Santos, Operations Unit Manager, for leading the way on these last two important steps, scheduled to be complete in May, 2011. Interpretive map panels at strategic locations will follow. We also recognize Jim Townsend, EBMUD Planning Manager, and Beverly Lane, EBMUD Board member & co-founder of the Iron Horse Trail, one of the great Rail-to-Trail success stories in the nation. Beverly is also a 2010 recipient of California’s Trail Advocacy Award, awarded at the 20th American Trails National Symposium.

We will make EBRPD maps available here for MCCT travelers as EBRPD makes them available.

Pathways to Progress, a wonderful introduction to the trail, over 20 years of accomplishments from 1987 – 2009 and a peek at our plans beyond 2009.